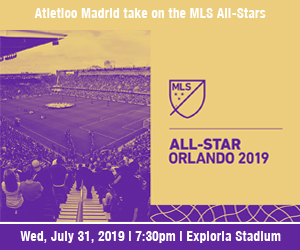 Orlando, FL –All credentialed media were invited to participate in the 2019 MLS All-Star Media Soccer Game at Exploria Stadium (Formally known as Orlando City Stadium). The team colors consists of green, gray, purple, pink, and red. The MLS Communications Department chose the teams roster. They place me on the purple team. Our team was comprised of photographers and made up of both women, and men. Other teams were comprised with reporters, TV videographers, Orlando City SC and MLS staff. Some of us were good and some of us were very rusty. Every team played a total of four games with a seven-player roster along with a substitute.

On Saturday morning, each team had a chance to play on the Exploria Stadium field made with natural grass along with Astroturf on the edge of the field. At time of play, the field was wet. Players were not allowed to wear cleats on the field. Most players played with tennis shows or bare feet. Yes, there were some injuries. One of my team’s players pulled a muscle and then I was called into the game. Eventually my teammate came back as a goalie and he was very good. The position I played was center defender. I’m not a type of person to run up and down the field. I was determined to defend the goal. Yes, some teams scored on us. But overall we had fun.

To recap our team’s games, we lost the first and second games. The third game we tied and the last game we won 2-0. It was not enough for our team to earn a spot for a playoff game. The winning team was the green team. They were very tuff team to play. I think most of them understood the game of soccer. The winning team received two official MLS All-Star Game balls used in these matches.

It was a real honor to participate in this game. This was a rare time outsiders got a chance to play on a professional field. What an experience for everyone. I am sure will hear more stories about these games in the media room at the MLS All-Star Game on Wednesday.

Directly after the game, the Exploria Stadium Kitchen cooked a nice buffet lunch for all who participated in the media soccer games, which was hosted by the MLS Communications Department. For lunch they served pasta with fettuccine sauce, vegetable pasta, meatballs, Chicken parmigiana, garlic bread, and salad. Don’t forget the dessert. They had a variety of pies and cookies to choose from. No one left hungry. The food was excellent.

After lunch, the media departed the stadium and most of us were off to the next assignment. Overall, it was an enjoyable day for everyone. I hope to do this in the future. Check back at a later time for highlights of the media soccer game on Otownfun youtube.com channel.

If you like this article, then like it on our Otownfun WordPress account. Also, join to be one of our followers at otownfun on WordPress. For more great events, places, and articles, please visit us at http://www.otownfun.com .

Note: All written content and images are copy righted by either by the person and or company who wrote and photograph published for this article. No duplication and or republishing of this article without the consent of Otownfun. Otownfun is not responsible for any errors and or mistakes in any articles. Any questions please contact Otownfunnow@gmail.com . ©2019 Otownfun.com